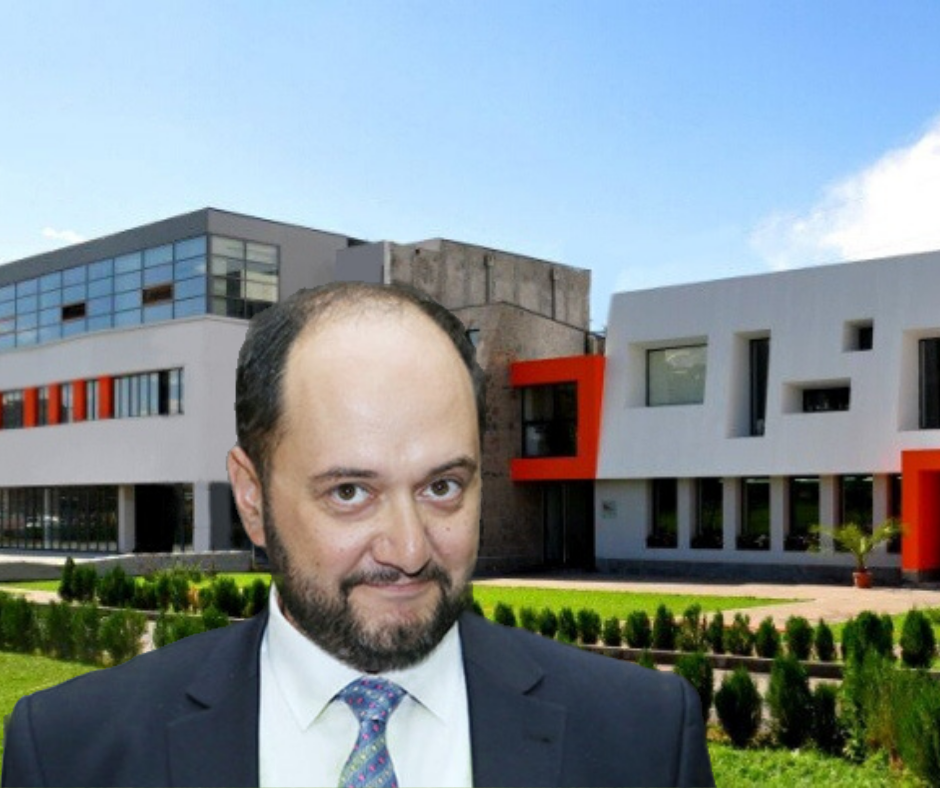 Back in May, 2018, the newly-appointed Minister of Education and Science Arayik Harutyunyan talked about government-funded educational projects and said that the Ministry of Education would not support the elite schools, and no money would be given to “Father Mesrops.”

Given that Father Mesrop Aramyan is one of the co-founders of Ayb and the Chairman of the Board of Trustees, Ayb Educational Foundation made a statement noting that if Harutyunyan dropped a hint about Ayb school by saying elite schools, then it had never received state funding in any form.

It should be noted that Ayb School is a non-profit organization operating as a fund, which was built by philanthropists and raised its funds mainly through philanthropists. So Harutyunyan's allusion that Ayb school was funded by the government is false.

Then, Harutyunyan made a Facebook post about Ayb noting that he had instructed to conduct a financial audit of Araratian Baccalaureate, and he would talk about the results of the audit in the future. In the same post, Arayik Harutyunyan wrote that President Serzh Sargsyan's former adviser – Father Mesrop - was one of the people who caused the most harm to the field of education. 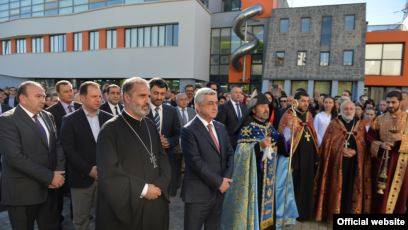 Harutyunyan, having no evidence in this regard, made indirect accusations against Father Mesrop, substantiating all this by the fact that Father Mesrop was the former adviser to the 3rd President of the Republic of Armenia Serzh Sargsyan and, was, in fact, a clergyman (We can remember Harutyunyan's attitude towards the church and the clergy by visiting the following links 1, 2).

It should be noted that the Araratian Baccalaureate program (NPEE - National Program for Educational Excellence) has been co-funded by the Government of Armenia and Ayb Educational Foundation and has proclaimed that its aim is to transform education at schools in Armenia and to create an internationally competitive school curriculum.

In addition, Harutyunyan provided the public with incorrect information noting that he had instructed to organize a financial audit at Araratian Baccalaureate, whereas, by the order of the Minister, there should be conducted a conformity assessment-study of preliminary and current results of the National Program for Educational Excellence -  Araratian Baccalaureate - at Ayb Educational Foundation.

Arayik Harutyunyan noted that there was a problem with the political activities of  Araratian Baccalaureate and Father Mesrop and there was an issue around the Araratian Baccalaureate program aimed at educational excellence, for the implementation of which Ayb Foundation had received large amount of funding from the state budget, which, according to evidence, which the Minister did not have, were conditioned by the identity of Father Mesrop, the adviser on education to the former President of the Republic of Armenia. Harutyunyan also spoke about the education system being immersed in corruption, promising corruption disclosure.

It should be noted that his statement, according to the publication of Araratian Baccalaureate, was a fantasy, and not a fact. 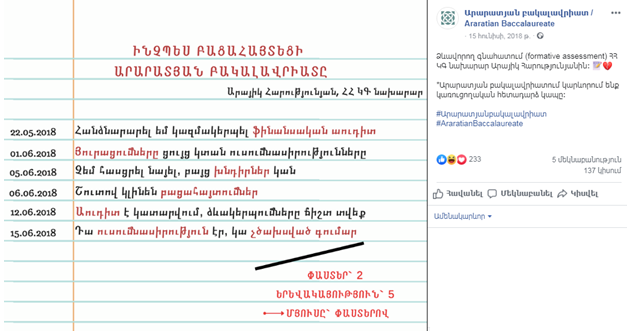 It is worth mentioning that at Ayb, audits were conducted each year, and, in fact, Harutyunyan's instruction was only about a 3-day check, which did not have any content, but rather financial examination were carried out, which were not brought to an official conclusion after six months from Harutyunyan’s statement despite the fact that the Minister said in June, 2018, that the results of the financial audit (in this case, financial examination) would be ready within a few days.

As a result of that situation, an agreement was signed that the Ministry of Education (now the Ministry of Education, Science, Sports and Culture) and Ayb had no debts or claims, the expenses related to the project served their purpose, and the cooperation between Ayb Educational Foundation and the Ministry of Education and Science was suspended in relation to the National Program for Educational Excellence. In addition, an agreement was reached to study the content of the program, and it was due on November 30 the same year, about which a press release was issued only on December 27, 2018, which, however, was not the final report. Although that press release contained records of certain violations, the allegations made by Arayik Harutyunyan were not substantiated by that release, and Ayb did not receive any official conclusion.

Arayik Harutyunyan's response to the journalists in this regard is particularly interesting, according to which he has not been following the processes going on around Ayb recently. “Does it seem to you that I deal with that issue day and night?” said Harutyunyan, assuring that the results of the examination would be published. Taking into account the fact, that that conversation with journalists took place in February, 2019, we were also assured in March that the information on examination would be published soon, which they had promised to do from May- June of the last year. As now it is November, it turns out that there has been no information on that examination published for about 1.5 years, and Harutyunyan, lacking evidence of his false statements, did not apologize and / or made no statements, which would deny his accusations of Ayb, Araratian Baccalaureate and Father Mesrop.

It is noteworthy that Harutyunyan talked about problems with Araratian Baccalaureate and Father Mesrop as early as in 2017 (Harutyunyan was not yet the Minister of Education), while he was participating in the opening ceremony of the third building of Ayb School. Harutyunyan's "feelings" about Father Mesrop are explained by his attitude to the church. 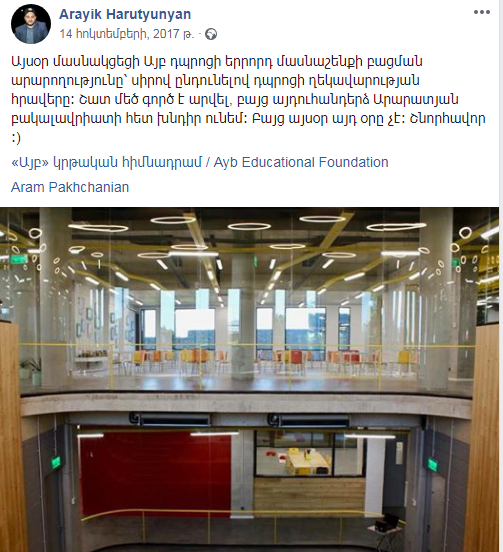 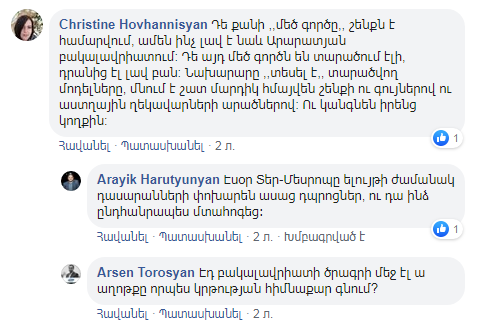 Thus, we can state that Arayik Harutyunyan, having assumed the post of the Minister of Education and Science, brought his personal and political problems into the field of education (connected with his attitude towards the church, the clergy, education, the 3rd President of the Republic of Armenia Serzh Sargsyan), which were expressed by his attitude towards Father Mesrop.

And the assurances, made for more than 1.5 years, that the results of the examination would be published soon suggest that Arayik Harutyunyan has made populist statements and, lacking evidence of those, prolongs the process of being exposed.

Armenian version of the article