Government's manipulation on the ban of the ZCMC' shares

According to the information spread in the media on October 22, the court upheld the motion of the "Zangezur Mining" to ban the 60% shares alienated to the Trotsenko's company.  Accordingly, the 25% shares donated to the government are also under the ban.

Based on the fiduciary duty towards "Zangezur Mining", Aram Orbelyan did not open the brackets. However, the undisputed news spread in the press was widely discussed by society.

Orbelyan told some information on the court proceedings launched in connection with the alienation of Combine's shares. The lawyer informed that the "Zangezur Mining" company previously filed a lawsuit demanding the implementation of the right to the preference of the 75% shares. The case was accepted, and the court secured the claim putting a ban on the Combine's 75% shares.

The processes following this decision of the court, to put it mildly, is strange.

According to the lawyer, on September 29, "Zangezur Mining" received a motion to cancel the security of the lawsuit, after which 2 hours they were notified that a court session was scheduled on the next day. On the day of the session, September 30 at 8:30 pm, the representative of "Zangezur Mining" was informed that the person who had already managed to acquire 60% of the Combine's shares had also managed to offer 25% of it to the government and the latter agreed to accept the donation.

The hasty court hearing to lift the ban on the Combine's shares, as a result of which the upholding the motion process, as well as the alienation of 60% of the shares and the donation of 25% to the government, overshadowed the deal wholly, making it one of the darkest deals in the history of the Third Republic of Armenia.

With the initiative of "Zangezur Mining," it was followed by the legal proceedings, as a result of which, according to the mass media, the ban has already been put on the abovementioned 60% shares (including 25% donated shares to the government).

Thus, to shadow, this information authorities have used their propaganda platforms. The same day that the press wrote on the ban implementation on the 25% of government and Trotsenko's 45% shares, the Civic.am, belonging to the Civil Contract party, published a news item: "The court abolished the security measure on the ban to manage the 75% of the Combine'sCombine's shares", telling about the abolishing the security measure on the management of 75% of Combine's shares as a result of the hastily convened court session.

The government has manipulated the society spreading information that the ban on shares has been lifted when another court ruling imposes a factual ban on the Trotsenko's 45 and government's 25 per cent of shares. 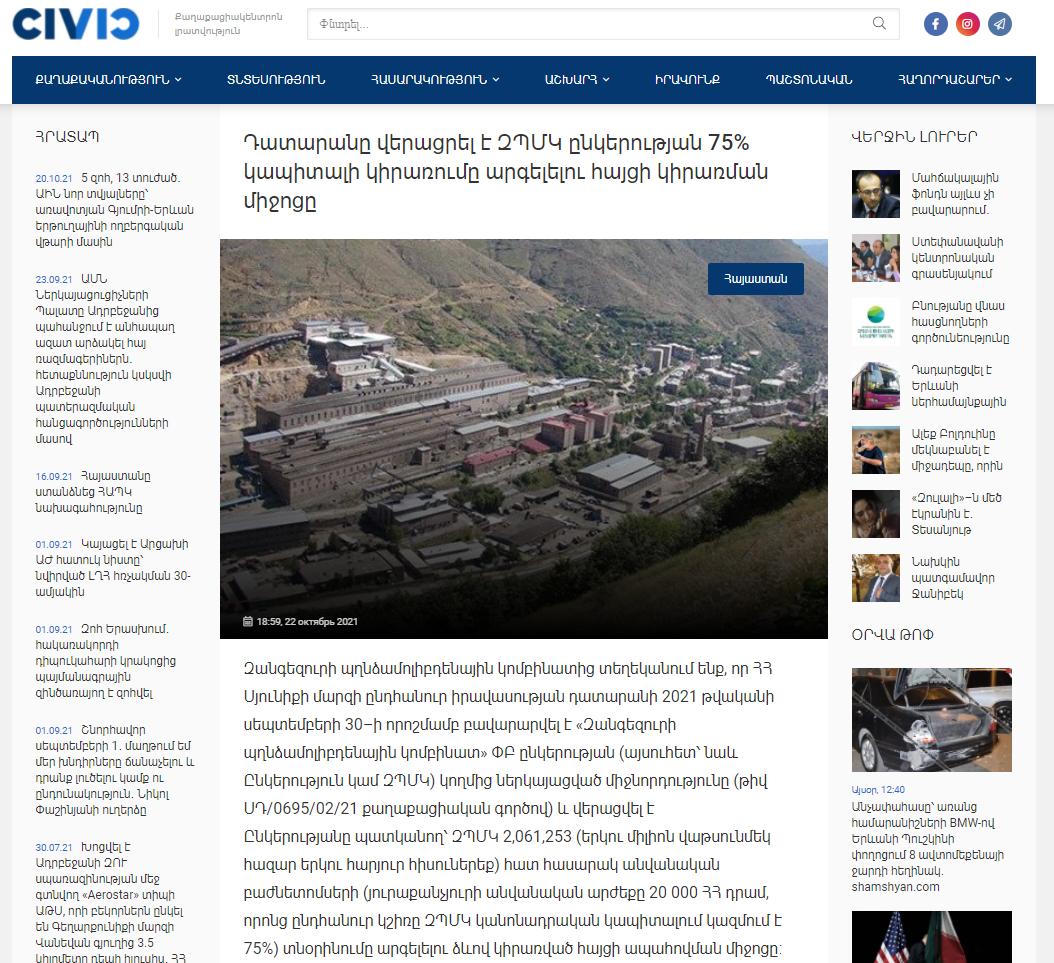