European Parliament Doesn’t Consider the Principles of “Rejection of the Use of Force and Threat of Force” and “Peaceful Settlement” in Nagorno Karabakh Conflict. David Shahnazaryan.168.am 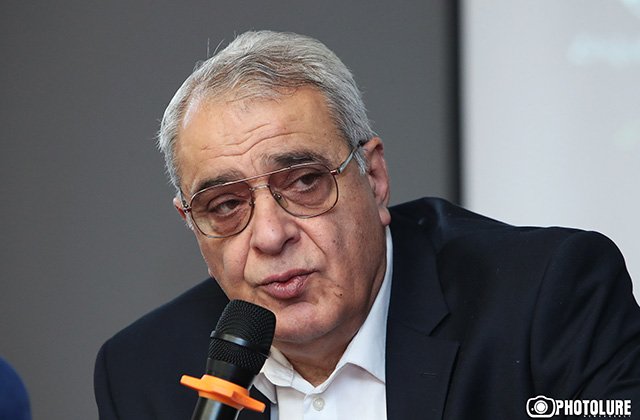 168.am’s interview with David Shahnazaryan, politician, Ambassador Extraordinary and Plenipotentiary, Ambassador and Special Representative of the President of Armenia on Special Missions in 1992-1995, head of Armenian Security Service in 1994-1995.

– Mr. Shahnazaryan, recently you gave an interview titled “EU Triggers. Azerbaijan to Start a New War”, in which you spoke on a draft of the resolution “European Parliament recommendation to the Council, the Commission and the Vice-President of the Commission / High Representative of the Union for Foreign Affairs and Security Policy on the Eastern Partnership, in the run-up to the June 2020 Summit” in details. In particular, you cited one of the articles from the resolution: “Reiterate the EU’s commitment to the sovereignty, territorial integrity and political independence of the EaP countries within their internationally recognized borders and support their efforts to fully enforce those principles; underline the importance of the unity and solidarity of the Member States in this regard;”, and noted that EU support in any possible way, including the conflict settlement through a new war, applies only to Azerbaijan and the Nagorno Karabakh conflict from the Eastern Partnership (EaP) Member States. Can this article, even, in theory, apply to Georgia, Ukraine and Moldova?

– It cannot be applied for political reasons, as the three countries, Georgia, Ukraine and Moldova, have repeatedly officially stated that they reject a military solution to conflicts. But even in theory, this cannot apply to those countries, as there is another article in the draft of the same resolution, “whereas the European Parliament condemns the violation of the sovereignty and territorial integrity of the EaP countries, does not recognize forceful changes of their borders and attempted annexation of their territories and rejects the use of force or the threat of force, and shares the EU’s commitment to supporting a peaceful conflict resolution via diplomatic means and in accordance with the norms and principles of international law, the UN Charter and the Helsinki Final Act, namely in the conflicts to which Russia is a party”.

Many resolutions and documents have been adopted in EU structures, in which it is enshrined that in conflicts of Moldova, Ukraine and Georgia, Russia is a party.

So, this article, as well as the one you mentioned, refer exclusively to Azerbaijan and the Nagorno Karabakh conflict.

The last part of the article, “namely in the conflicts to which Russia is a party”, initially was not included in the resolution and was added after the Armenian Prime Minister’s announcement that “Azerbaijan is constructive” in National Assembly on May 6.

I want to restate that neither Armenian Foreign Ministry nor the parliamentary diplomacy did absolutely nothing in this case but Azerbaijan, on the other hand, was hyperactive.

This draft will be discussed and adopted during the European Parliament plenary session on 16-17 June, and there is a great possibility that the articles I mentioned as well as the one from my previous interview on Nagorno Karabakh conflict in which the Basic Principles were not mentioned, will be adopted by vote.

Note that this document adopted by the EP Foreign Affairs Committee, has not been published yet- it will be available in a few days.

– Don’t you think these are dangerous developments…?

– During his two-year rule, Nikol Pashinyan gave, I would say gifted, arguments to Azerbaijan many times to justify the new war unleashed before the international community on which I have repeatedly voiced in the press. Adopting this project, the European Union will show its support for Azerbaijan in its new war, and the EU member states must be united on this issue.