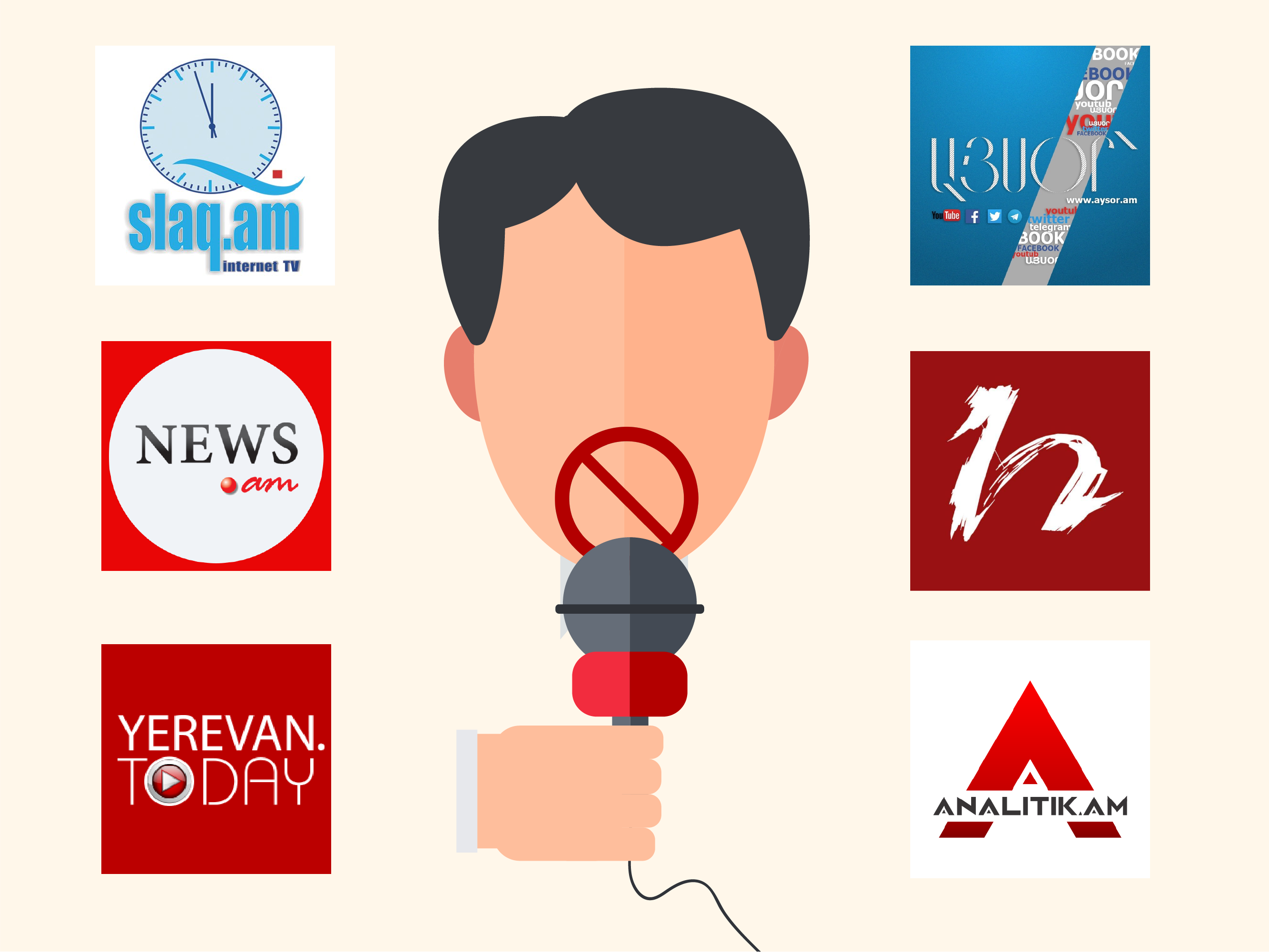 During his visit to Davos, Armenian Prime Minister Nikol Pashinyan stated that that the press in Armenia was freer than it had ever been before. However, there are quite a lot of cases, when the authorities directly impede the work of the press and voice numerous accusations against it, and such actions do not in any way contribute to the free mass media, working without any pressures. In this article, we will present those scandalous cases, which substantiate the claim that the current authorities have put pressure on the media.

The first case of pressure on the press took place at the beginning of Nikol Pashinyan's tenure - in June 2018, when the prime minister made a post on his Facebook page, saying, “Certain TV companies, in fact, have decided to carry out anti-government propaganda by using the opportunity for unrestricted freedom of speech. This is probably one of the cases when the courtesy of the government is repeatedly confused with weakness or naivety. Do not do that. Simply do not do that!” The post sparked off a public controversy. The opinion that the prime minister's assessment was an interference in the activities of TV companies was prevalent. Following the post, a number of media representatives made statements at the same time condemning the pressure on the press. The statements read as follows: There are explicit, dangerous and extremely aggressive statements on social media promoting intolerance, hatred, hostility against the journalists and the media outlets. Those statements are being made both by some parts of society and by the representatives of the ruling political force and their supporters. In the statement, journalists also voiced a number of other issues, including technical and financial damage caused to the media,  rough treatment of the journalists, officials choosing social networks as a way of transferring information and so on.

The prime minister never opened up about the post and did not mention which TV company the post was about. But many defined it as an indirect accusation against Yerkir Media TV (in English, country) for interviewing Robert Kocharyan.

The next case of direct interference in the media activities took place when the recording of the leaked telephone conversation between the director of the National Security Service and the head of the Special Investigation Service of the Republic of Armenia was made public. After the publication, Nikol Pashinyan ordered the law enforcement agencies to find the source of the recording.  The prime minister was suspicious of those people and oligarchs who were in contact with former high-ranking officials, and who, according to his information, “have been buying covert listening devices with money plundered from the common people and have been providing special services within the state.” He gave Artur Vanetsyan and Valeriy Osipyan two hours to discover the source and report the results of the work done.

This investigation process led to the intrusion of the law enforcement agencies into the office of YerevanToday news website based on the fact that that site was the first to publish the recording. The computers of the website were confiscated and were not returned for a long time, which affected the uninterrupted work of the media. So far, there is no officially confirmed data that YerevanToday was the “author” that made the leaked conversation public.

Later, the law enforcement agencies intruded into the offices of other news websites, particularly News.am and Aysor.am.

Current authorities often refer to the materials in the press, which relate to their family members, their possessions, business trips, and the traditional banquets, organized by the government, with an accusatory tone. Any such publication is severely criticized. But the article from Hraparak.am (in English, square). about the khash-party* of the officials attracted the harshest criticism among other similar media publications, and Prime Minister Nikol Pashinyan touched upon it himself. In particular, Nikol Pashinyan did not like the article from Hraparak.am, where comparisons were made between current and former authorities. The prime minister made a long post on his page saying, “There is one thing that differentiates us from the Republicans: we do not keep this and similar media outlets under control.”

However, the prime minister was not satisfied with the post and went further by mentioning during his live stream that the 90% of the press belonged to the opposition, and the majority of the oppositionists were former authorities. According to the prime minister, the press was “republicanizing” them by showing that those authorities were the same as the former, republican authorities. But, if 90% of media companies belong to the former authorities, it turns out that they aired the demonstrations in April-May on their news websites  24/7 and that they started a media campaign against themselves. Don’t you think that it is not very logical?

The prime minister also made statements promoting intolerance against the media publications about his family members, whereas such attention to the first person at the state level and to his family is not only normal, but is also demanded by the public, and that demand is supported by the media.

This attitude of the authorities towards the media is incomprehensible, especially because the same media previously published similar materials. For example,  The Armenian Times daily, whose editor-in-chief was Nikol Pashinyan, then his wife, Anna Hakobyan, took the position. She was informed when a series of articles was being repeatedly published about the wealth of the former authorities, their families, and even their appearance. There are a lot of cases when the titles of those articles went beyond the limits of correctness (for example, “The Photo of the Day: Vigen Sargsyan and Kim Kardashian's lips”). And now, the editor-in-chief of this media company calls to other media representatives for correctness. Anna Hakobyan wrote on her Facebook page, “Armenian media should always be on the top, irrespective of everything: the ruling authorities, politics, parties. At the end of the day, leaders, governments, parties come and go, but the media always stays, and it should always be in the top position.”

MP Sipan Pashinyan also touched upon the article from Hraparak.am and accused the media of “republicanizing them” in his interview.

MPs Taguhi Ghazaryan and Taguhi Tovmasyan also spoke about the activities of the press. In particular, Taguhi Ghazaryan called for developing skills in media literacy in her interview and insisted that manipulative content and obvious misinformation were now largely taking place in the media. Taguhi Tovmasyan even confessed that she herself had published such exaggerated articles in the newspaper she had been working for.

Alen Simonyan, in his turn, touched upon the activities of the press, and said that a media war was declared against the authorities and that the challenge was accepted.

These cases are only a part of the available data, and every day we witness an increase in the negative attitude of the authorities towards the media.

There is another problem with the representatives of the government avoiding the press and being interviewed by bringing funny examples. Particularly, accredited journalists were not allowed to be present during the closed-door meeting organized by the My Step faction in the National Assembly, and after the session, the MPs refused to comment on the meeting. For example, MP Taguhi Ghazaryan was “in a hurry” because her taxi was waiting, and the other MP was avoiding journalists' questions because his “neck was tingling.” MP Lusine Badalyan, a member of the My Step faction, has recently made a post, saying, “I refuse to give an interview as long as it is not interesting what I have said and done but what weaknesses I have, which will be used to cling to, to tear a strip off me, to find something to mock me.”

Anna Hakobyan, the wife of Prime Minister Nikol Pashinyan, also continues to complain about the press, when the media outlets discovered that she left with her husband for business trips abroad. Anna Hakobyan published an article in The Armenian Times mocking her fellow journalists for discovering and publicizing her visit to Brussels.

Another case of restrictions on the media was the letter from Yerevan Municipality addressed to Hraparak daily and A1+ TV company ordering them to free the territories their offices occupied.

At present, the authorities have specifically targeted YerevanToday (accused of being the source of the popular leaked conversation), Analitik.am (for suspecting David Sanasaryan of corruption), Politik.am (for publishing an article about Tigran Avinyan using marijuana during working hours), Hraparak.am (for touching upon the topic of khash and "republicanizing them"), Slaq.am ((in English, an arrow) for the owner who is a member of the Republican party and for criticizing them), and Blognews.am (for criticizing them). Such targeting is sometimes done through the Facebook posts of the people supporing the current authorities. Users, making similar posts, are also encouraging others to follow only the pro-government media sources, The Armenian Times and Radio Free Europe. Recently, MP Lusine Badalyan, a member of the My Step faction, wrote about this openly calling to read, for example, Armtimes.com, if it is necessary to check the authenticity of any information, “and, if there is nothing about it, then do not hurry to make judgments.” Lusine Badalyan also called for people to “watch interviews and follow the news on Public TV Company of Armenia or Radio Free Europe, as well as 1in.am, Civilnet, Hetq (in English, trace), and some other channels, which are more or less impartial.” Interestingly, that impartiality does not necessarily shine through for the mentioned media companies, and they catch the reader’s eye with the publications supporting the authorities.

All of this was followed by a series of press conferences by the media representatives, during which the participants were discussing the solutions which should be used to eliminate restrictions on the media.

All of these facts prove the assumption that the authorities in Armenia have put pressure on the media  and try to present them as an enemy of the authorities.