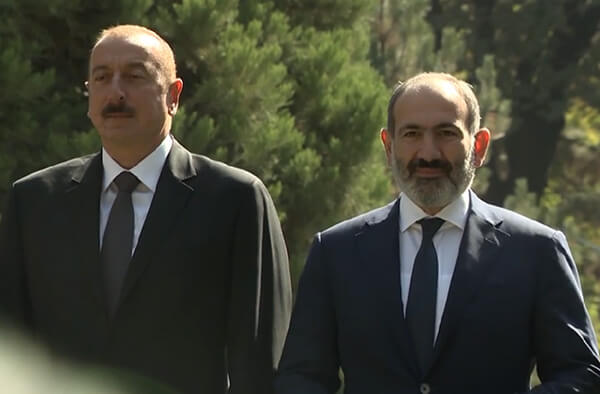 The Nagorno-Karabakh conflict has been and remains the focus of concern over different geopolitical developments for about 30 years. For years, the states interested in this region have not missed the opportunity to make the problem a bargaining chip, but the ongoing internal political developments have their say at the same time.

The change of government in Armenia in April and May has raised hopes of the neighboring states for solving the problem in their favor.  Particularly, the famous meeting between Aliyev and Pashinyan in an elevator in Dushanbe became the first proof of the aforementioned, after which the shots at the line of contact between the Karabakh and Azerbaijani armed forces were significantly reduced (by the way, it should be noted that before that the Ministers of Foreign Affairs of two countries had managed to have two official meetings). That was followed by the third official meeting between the Ministers of Foreign Affairs in Milan, which, in essence, was not different from the other two meetings.

These events were followed by the second, informal behind-the-scenes meeting between Aliyev and Pashinyan in Saint Petersburg, about which, by the way, we first received the information from the Head of the Foreign Policy Department of the Presidential Administration Hikmet Hajiyev. That meeting, in essence, did not differ much from the previous informal meeting.  Perhaps, it is worth to mention the first meeting between the Ministers of Foreign Affairs of Armenia and Azerbaijan in Paris this year, which received heated response both from a number of international organizations and states and from the Armenian community.

Particularly remarkable were the announcement of the office of the High Representative of the European Union for Foreign Affairs and Security Policy Federica Mogherini, which mentioned that there were positive signals in the negotiations, US President Donald Trump's congratulatory message on Nikol Pashinyan’s appointment as Prime Minister of Armenia and his coalition’s success in the December 9, 2018, parliamentary elections.

Particularly, it is mentioned in his message that:

“The United States supports a prosperous, democratic Armenia at peace with its neighbors. Together, we can make progress on deepening trade between our countries, strengthening global security, and combating corruption. A peaceful solution to the Nagorno-Karabakh conflict will help these efforts.” It was followed by Sergey Lavrov's statement when the Russian Foreign Minister dropped a bombshell by announcing that Moscow supports Baku's willingness to find solutions to the Nagorno-Karabakh conflict. It should be reminded that the Foreign Ministers of Armenia and Azerbaijan disseminated the same statements, where it was noted that during the meeting the interlocutors had touched upon a wide range of issues related to the peace process, including preparation of societies for life in peace, security and the sustainable development of the region.

Let's combine all this with Nikol Pashinyan's statements on the Nagorno-Karabakh issue meant for “local media consumption.” On October 24, 2018, Pashinyan announced in the National Assembly: "For every solution, we have to make it public. ... I do not think the solution to the Nagorno-Karabakh issue is in the hands of the government, or in mine, or in any prime minister’s hands. The Armenian people, the people of Armenia, the people of Artsakh, and in this case the Diaspora should solve the Nagorno-Karabakh conflict because this is a pan-Armenian issue. Further, he noted for multiple times: "I have repeatedly stated that I represent Armenia in the negotiation process. I cannot represent Artsakh for a simple reason, since the citizens of that country did not elect me as their prime minister, they have their own government. I cannot negotiate on behalf of Nagorno-Karabakh. Everyone understands that.” Later, he added: “However, everyone generally knows what we said. The negotiations were held within the framework that corresponds to my public statements. There is nothing new yet."

The last part of this statement was apparently referring to the Pashinyan-Aliyev non-formal meeting in Davos, after which the prime minister wrote on his Facebook page: "There was an informal meeting with Ilham Aliyev in Davos. We exchanged our opinions on further discussions and the negotiation process at this juncture. The meeting lasted about an hour and a half."

From Nikol Pashinyan's statements, it turns out that:

So why do they prepare societies for life in peace, or is it not a stage of solving the Nagorno-Karabakh conflict, and if it is a stage, therefore, there is a negotiation process, if there is a negotiation process, why is it not transparent, and most importantly, why the authorities of Artsakh do not participate in this process, or in general why are they not informed? It should be reminded that on February 26, the Vice President of National Assembly of Artsakh Vahram Balayan announced that there were incomprehensible processes taking place for Arstakh: on the one hand, there were the denials of the Armenian authorities that there would be no conspiracies behind the back of the people of Artsakh, and on the other hand, there were the optimistic statements of Azerbaijan. In fact, all the public statements of Nikol Pashinyan on the Nagorno-Karabakh conflict are for the “local media consumption” mission, and the current authorities are holding the same closed, behind-the-scenes negotiations today, something they were accusing the former authorities of.  If we add the illiteracy of some representatives of the ruling elite in the Nagorno-Karabakh conflict, then we are left only with waiting for a miracle.