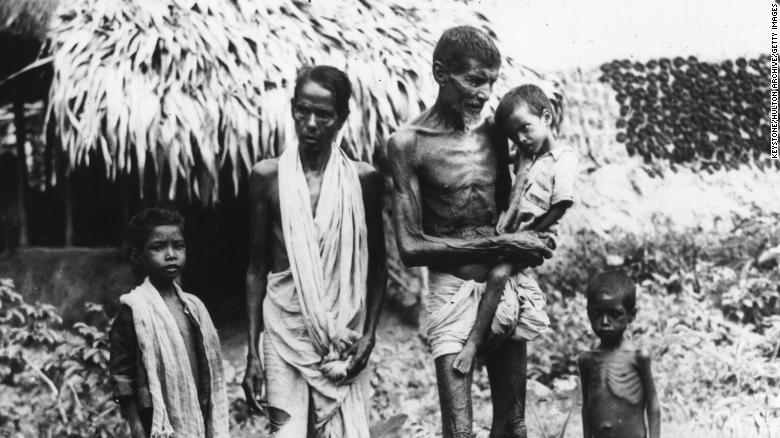 (CNN) Winston Churchill's policies caused a famine that claimed more than 3 million Indian lives, according to a new study using soil analysis for the first time to prove the origins of the disaster.

The 1943 Bengal famine was the only famine in modern Indian history not to occur as a result of serious drought, states the report, which was conducted by researchers in India and the United States.

"This was a unique famine, caused by policy failure instead of any drought," Vimal Mishra, the lead researcher and an associate professor at the Indian Institute of Technology Gandhinagar, told CNN.

Researchers used weather data to gauge the amount of moisture in the soil during six major famines in the subcontinent between 1870 and 1943.

"There have been no major famines since independence," said Mishra. "And so we started our research thinking the famines would have been caused by drought due to factors such as lack of irrigation."

They found that five of the famines were largely caused by droughts, but in 1943, at the height of the Bengal famine, rain levels were above average, according to the study published in the journal Geophysical Research Letters.

"The Bengal famine of 1943 was completely because of policy failure," Mishra said.

Policy lapses such as prioritizing distribution of vital supplies to the military, stopping rice imports and not declaring that it was actually a famine were among the factors that led to the magnitude of the tragedy, he added.

Mishra said examining previous famines showed that policy could be effective. "In the 1873-74 famine, about 25 million people were affected, but mortality was almost negligible."

According to Mishra, the low mortality was due to food imports from Burma -- now known as Myanmar -- and relief aid provided by the British government. Richard Temple, who was the Bengal lieutenant governor, imported and distributed food and relief money and thus saved a lot of lives, he said.

But he said the British government criticized Temple's use of resources for saving Indian lives and during the next drought in the 19th century, his policies were dropped and millions more people died.

The Nobel prize-winning economist Amartya Sen argued in 1981 that there should have been enough supplies to feed Bengal in 1943.

In a recent book, writer Madhusree Mukerjee argued the famine was exacerbated by Churchill's decisions.

She wrote that famine was caused in part by large-scale exports of food from India. India exported more than 70,000 tons of rice between January and July 1943 as the famine set in, she said.

Not everyone lays the blame at the Prime Minister's door, however. Churchill biographer Andrew Roberts wrote in an opinion column on Britain's i news website last year that Churchill "did all he could to relieve the terrible Bengal Famine subject to the exigencies of the Japanese holding Burma and their submarines infesting the Bay of Bengal."