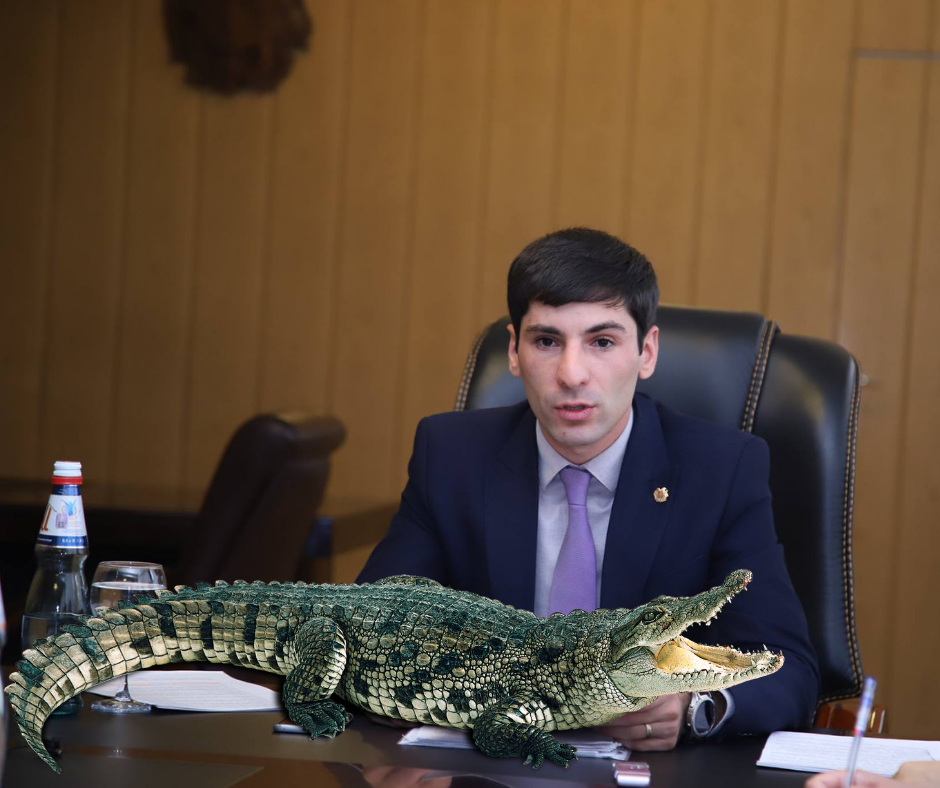 Even last year, during his press conference for the 100 day work anniversary, the governor of Ararat province Garik Sargsyan stated that crocodile eggs would be imported to Armenia to create a tourist attraction in Dashtavan village of Ararat province. As it turned out, the author of the initiative was geologist Khachatur Sargsyan, the founder of Armon Co. LTD. He intended to import crocodile eggs from Tanzania, Kenya, Uganda and Zambia: later, the Nile crocodiles would be brought to Armenia as well. First, the crocodiles would live in the recreational and amusement park in Dashtavan community, then a big crocodile farm would be built. In the recreational area, there would also be ducks, chickens, geese besides the crocodiles, and the park would consist of 31 infrastructures, the crocodile farm being only one of those. The park would also have infrastructures for children and some other playgrounds. According to the businessman, the construction work should probably start on March 1, 2019, to be completed within five years.

This topic has become one of the most debated ones on the Internet when the governor of Ararat province Garik Sargsyan said that the State Revenue Committee (SRC) could not determine whether crocodile eggs belonged to a bird or to an animal. All that turned into humor, even Garik Sargsyan began to talk about that with humor and made a series of posts on his Facebook page.

For a few days, discussions and humorous posts about whether crocodile eggs belonged to a bird or to an animal put a number of issues in the shade, consequently, they were not clarified. This topic which makes many people laugh is really accompanied by a lot of issues.

There are also issues around the fact that that the governor of Ararat province did not submit any document relating either to examination, or land resources allocation, or a water use permit.

It is also important to note that a number of experts periodically ring alarm bells about the problems that need to be addressed and for which preventive measures should be taken, but the problems raised by experts do not get public recognition and remain unsolved.

Silva Adamyan, President of the Center for Bird Lovers NGO, also spoke about the problem. She noted that she had applied to the inspection body, and it became clear that no land resources allocation had been made by Dashtavan municipality as of November 20, 2018, and no construction work for the crocodile farm had been implemented. This February, the experts applied to the Ministry of Nature Protection with the same issue again, where they confirmed that Dashtavan municipality had not allocated any land resources to the given organization as of February 12, 2019, and since there were no results of the positive environmental screening (which was also missing according to the data as of November 2018), the organization could not implement any business activities.

If we believe the words of the businessman, the project should be completed within five years. This businessman plans to allocate 300-500 jobs, created to take care of the crocodiles, to the local rural residents, which are not specialized in that field. However, having studied the phenomenon of crocodile farming, it becomes clear that only the people who are specialized in the field can take care of the Nile crocodiles, and that crocodile farms are under strict supervision.  The issues here are the following: how do the businessmen and Garik Sargsyan imagine people with no specialization working with those dangerous crocodile species, have they developed a system to professionally train those people or is there specific information on how long it will take to complete a specialization in the field? All of this remains unclear.

To find out all this, AntiFake.am contacted environmentalist Silva Adamyan, President of the Center for Bird Lovers NGO. When asked, “How much time will it take for the rural residents to complete a specialization in that field?’ she answered that the residents of the province would not be able to undergo professional development, and usually people who worked in such farms came from the places where crocodiles were accustomed to the area, and who had been communicating with those animals for many years, knew their lifestyle and behavior. Silva Adamyan brought Thailand as an example and noted that the people who were working with the crocodiles there came from African countries, and they received salary for their work. And teaching someone how to work with crocodiles made no sense, because, first of all, it would put people’s lives in danger, and there was no need to teach the rural residents the skills of the people from African countries who had been communicating with those animals for years and for centuries.

During our conversation, she also mentioned that that field had no development perspectives because the conditions in Armenia could not be satisfactory for any kind of animal that was not adapted to our climatic conditions, no matter whether it was a crocodile or other species.  Silva Adamyan also noted that they had sent letters to Ararat regional administration and Dashtavan municipality and found out that not only had there been no allocation of land resources, but also there had not been a person who had requested land allocation and had been rejected.

As we know, the program, according to the source, should have started on March 1, but, on one hand, there has been no land allocation so far, no farm work has begun, on the other hand, no security measures have been taken to ensure the safety of employees who are not specialists in that field. Consequently, the crocodile farm was a big myth, which will most likely remain in that position.