Fight against disinformation, or censure, unprofessionalism, biased approach and manipulation? Statement of the Union of Journalists of Armenia and editors 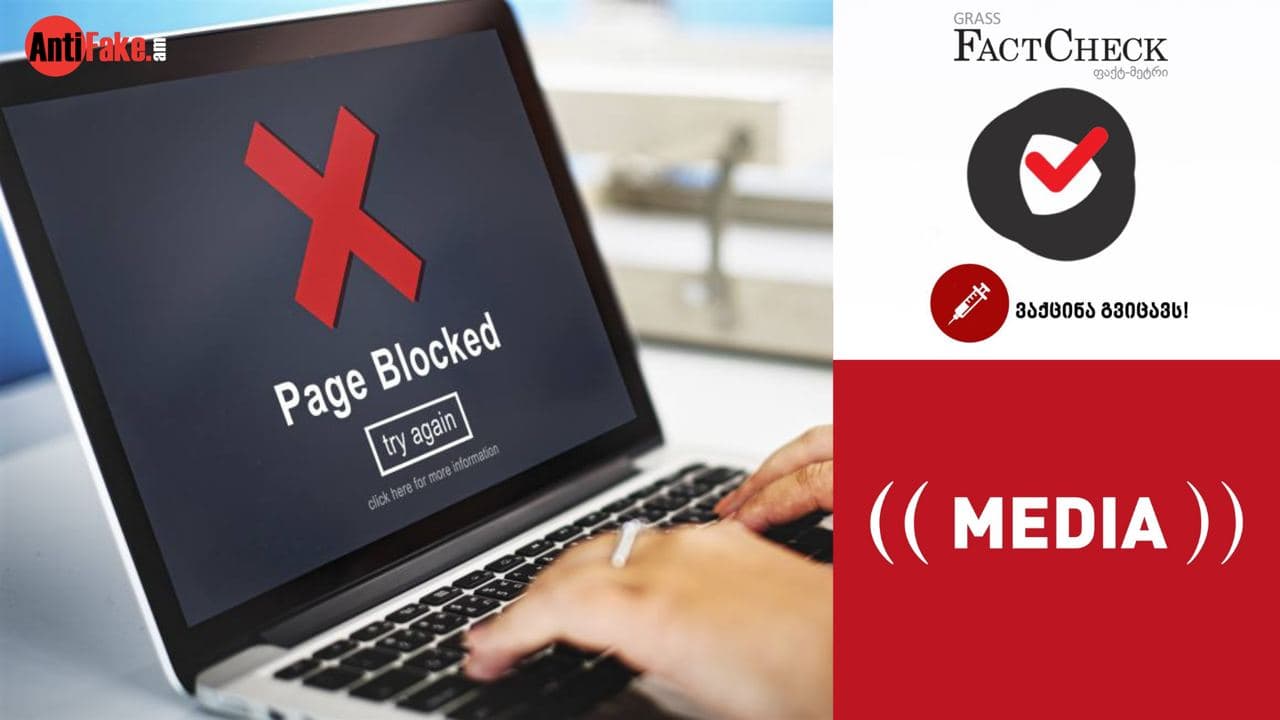 Created months ago with a Georgian domain, the Armenian-language website https://factcheck.ge/, in cooperation with the Armenian website www.media.am, has launched a battle against, as the representatives of the websites call it, disinformation, but in reality, it is a battle against the Facebook pages of certain selectively targeted media outlets for posting allegedly fake news and manipulative articles.

Years ago, the Media Initiatives Center, within the scope of which media.am is run, assumed the mission to support — in the media sector in Armenia — freedom of expression, the establishment and development of independent media, the improvement of media legislation and the protection of journalists’ rights (as posted on www.mediainitiatives.am).

However, today, this organization has assumed the role of a judge that is against the media, and especially with standards and principles that are immensely questionable and are unknown to the professional community.

From the first day of its establishment, the Media Initiatives Center adopted a policy to promote exercise of the fundamental human right to receive and disseminate information; to provide diverse, pluralistic and complete information to the public and to support the activities and development of free, responsible and professional media. In spite of this, today, the Media Initiatives Center has turned media.am (a news-analytical website created by the organization) into a tool and is transmitting to Facebook — without discussions with professional experts, through subjective selection and by detecting, in its opinion, fake news and manipulative articles — mediated information about the fake news and manipulative articles. With this, the Facebook pages of several websites in Armenia are blocked, advertisements are not posted, and there are restrictions on access to and visibility of publications.

Of course, there is no doubt that it is necessary to fight against disinformation, as well as fake and unverified news. At the same time, what is indisputable is the fact that the methods for the fight against these phenomena need to be clear, transparent, objective and impartial, without distinguishing between pleasant and unpleasant, opposition or pro-government media outlets or Facebook users…Basically, it is necessary to observe one of the sacred rules of journalism, that is, balance.

It is no secret that Facebook is currently one of the important working tools for the mass media in all parts of the world. Consequently, as a result of their studies that are not always substantiated and comprehensive, the people who implement Facebook’s Fact-Checking Program are the people who hinder the dissemination of information and public awareness, and this deals a serious blow to the rankings and reputations of media outlets, the audiences of hundreds of thousands of readers, as well as freedom of expression and sources of funding.

It is necessary to stress the fact that media outlets found out about the initiative just recently when readers sounded the alarm and tried to understand why the problems with access to the Facebook pages of those media outlets had emerged. As for the Media Initiatives Center and media.am, which collaborate with the Georgian https://factcheck.ge, only on June 7 (the day the election campaign for the snap elections of the National Assembly of the Republic of Armenia was launched) did they inform the professional community about Facebook’s Fact-Checking Program. The authors of the initiative simply posted an article on their website and Facebook page, and on June 23, they posted a message that read as follows:

“Media.am has launched cooperation with Factcheck.ge, which was accredited by the IFCN in September 2020. The fact-checking team, together with its Georgian partners, checks the information disseminated on Facebook and Instagram that is somehow related to the snap elections and post-election processes.”

One gets the impression that, seemingly, the purpose of the authors of the initiative is not to clear the field so that disinformation is not spread. Just the fact that no discussion was held with mass media outlets and the Union of Journalists of Armenia; the Program was not presented; the jurisdiction of the website with a new status and new framework of cooperation, the limits of activities, the options for cooperation and the opportunities for media outlets to file appeals were not explained; proposals or opinions were not heard and no constructive proposal was made for cooperation with the media, is perhaps enough to get that impression.

If the purpose of the people implementing this Program was truly sincere and the objective was not to silence undesired and oppositional media outlets, then not only did the media and media organizations have to be informed about the to-be-launched Program at least a few months in advance, but there also had to be hearings with lawyers, media representatives and media experts. The mass media, in their turn, would share information about the difficulties with the organizing of their work, including procurement of information, work with government agencies and professional organizations, as well as verification and specification of information.

All media outlets are in favor of the fight against disinformation and fake news and want to report specified information (this is the professional duty of everyone and is respectful towards readers), but unfortunately, today, media outlets are unable to do this due to several obstacles.

Before this Fact-Checking Program was launched and during its implementation, those implementing the Program failed to observe the sacred rules of journalism, that is, being transparent and listening to all sides without bias. As a result, what has become a reason for bewilderment and serious doubts is the fact that media.am has assumed the role of a censor and judge, and it even demands censure of interviews published by mass media outlets and the remarks of the people being interviewed.

It turns out that the party proposing to censure the remarks of the co-author participating in the interview proposes to circumvent or breach the legislation of the Republic of Armenia.

Facebook is highly popular in all parts of the world, as well as in Armenia, and more than 40% of readers of mass media outlets read those publications via Facebook. Media outlets have gained the trust of readers and have ensured hundreds of thousands of subscribed followers through years of hard work.

If the purpose of these Armenian and Georgian companies implementing the Fact-Checking Program is truly sincere and is aimed at fighting against fake news, not causing harm to the media, freedom of speech and freedom of expression, before rendering a so-called “verdict”, they could have and were obliged to inform the media about a particular disputed publication, consider the publication, present grounds for the fact that there is truly false information in the publication, reach an agreement to correct it or remove the publication, and contact the Facebook administration only after it had not been corrected or removed.

However, with this practice, and due to a policy that was apparently not studied in depth and was ill-considered, as well as with the intention to establish control, during the elections, the Armenia-based fact-checking organization and its website made an attempt to silence responsible and well-established media outlets that are legal entities, are legally registered and have been operating and paying taxes for many years. Instead, various types of websites have mushroomed and are freely disseminating the most repugnant disinformation and fake news via their Facebook pages and groups that have tens of thousands of followers.

As a matter of fact, Armenian media outlets have rather successful experience in cooperating with Facebook and are partners with the latter. There have been many cases when the administration of Facebook has made a comment on a specific publication posted on a particular website, and the publication has either been removed or amended in accordance with the rules of Facebook.

What is also noteworthy is the fact that when Facebook changes any algorithm or introduces new rules, it definitely informs its subscribers in advance, a particular algorithm can be appealed, and there is an opportunity to fix the mistake, but in the given case, the groundless and arbitrary decision of media.am is accepted as a truth, or as media.am describes it, as the verdict of a higher instance. Let us mention that prior to June 7, for one consecutive week (after the launch of the Fact-Checking Program), the terms and conditions for appealing a verdict were posted in Georgian on the official website of the Georgian organization. Basically, for one week, Armenian mass media outlets were deprived of the opportunity to appeal the “verdicts” for the publications that were assessed by the organizations. The system for notification and appeals is not operating.

Thus, with its biased “verdicts”, the fact-checking organization is causing serious damages to the Facebook pages of media outlets that have 4,000,000 and more viewers every month, and very often, the fact-checking organization disregards the public clarifications, counterarguments and objections that the particular media outlet presents with regard to the disputed publication.

As a matter of fact, the studies on the analyses posted on media.am show that, in many cases, the publications of this website regarding a specific article of a particular media outlet are themselves manipulative, are not completely specified and are not comprehensive, and they are simply a conclusion drawn on the basis of one opinion. In certain cases, the people running the website cite excerpts from Russian media outlets as certification or evidence of fake news that has been published — is there any guarantee that what is written is absolutely true? The responses to inquiries received from state bodies are also presented as evidence.

In some cases, besides presenting facts about the material being checked, the fact-checker has also touched upon the activities of a media outlet in general, labeling the website as a website that disseminates fake news, but the fact-checker does not have the right to do that.

In certain cases, there have been evaluations of a particular media outlet, its founder and other platforms coordinated by the founder, forming, as disseminators of false information, a biased approach among readers, but fact-checkers do not have the right to do this, and this is not part of Facebook’s policy for checking credibility of publications on Facebook through a third party and the functions of fact-checkers.

Let us leave aside the fact that the people implementing this Program accept the responses received from government agencies as the absolute truth, and they are doing this in the case when the course and end of the recent 44-day war in Artsakh (Nagorno-Karabakh) eventually showed that the information that was provided to the public during those days did not always correspond to reality and that the public was misled since it only received official information.